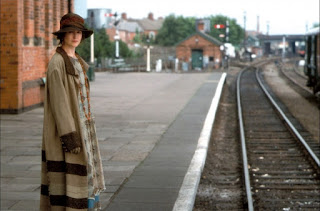 A Twitter friend named Paula has asked for folks to submit ideas for a blog-a-thon about what we think will be the classic films of the future. In other words, what relatively recent movies (namely, from the 21st century), do we think will be considered classics in the decades to come, possibly airing on such venerable stations as Turner Classic Movies? While a number of films come to mind for such a category, one in particular stood out from the rest, and thus is my entry for Paula's blog-a-thon.

Every year, I pick a 'best film,' a movie that resonates with me in some way, and would seem to be head & shoulders above the rest. For 2002, that film was The Hours. For some movies, an impressive pedigree doesn't always equal quality. Thankfully, for this movie, that isn't the case. We have Stephen Daldry directing, he of Billy Elliot and The Reader fame. David Hare's solid screenplay is based upon the exquisite novel of the same name by Michael Cunnigham. And just savor this cast list: Meryl Streep, Julianne Moore, Nicole Kidman, Toni Collette, Claire Danes, Miranda Richardson, Allison Janney, Ed Harris and John C. Reilly. Oh, and did I mention the beautiful score by Philip Glass?

The Hours takes place during three different time periods, deftly shifting between them throughout the film. Nicole Kidman is the real-life novelist Virginia Woolf, in the movie's earliest era (the 1920s). She is setting down to write Mrs. Dalloway, yet her depression and moodiness is taking a toll on her life and marriage. Virginia's long-suffering husband begs and pleads for her not to take her own life. In many excruciatingly awkward and painful scenes, we see that he just wants her to be happy, but that happiness is not always a gift than can be bestowed by others.

Julianne Moore is Laura, a housewife in the 1950s, living in a bland (but pleasant enough) suburban tract of homes with her husband (played by John C. Reilly) and son, Richie. Laura, not unlike Virginia Woolf, is desperately unhappy. In some rather heartbreaking scenes, we see Laura going through the motions of her day, trying to play a role she feels cast in, yet also feeling trapped and depressed. She is reading Mrs. Dalloway. She contemplates suicide. She has a devoted son, and a husband who, while rather oblivious to her pain, adores her. They are not enough. 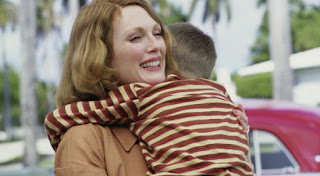 In 2001, Laura's son Richie (Ed Harris) is all grown-up, the novelist Richard Brown, and is dying of AIDS. Meryl Streep is Clarissa, a weary New Yorker, and Richard's caregiver. Before they both became comfortable with their homosexuality, Richard and Clarissa were lovers. She is planning an extravagant party for him. Richard is nonplussed. He is too ill, tired and bitter to care. He loves Clarissa, still. That is all. Before our time with their vignette is over, Richard's mother, Laura, comes to visit. It is a bittersweet arrival.

The Hours is a multi-layered film. Many of its characters dwell in a depressive state. We can sympathize with their plight, but also feel the urge to want to shake them out of their funk. As in life, it is not always simple to do so. Their lives, much like our own, are shaped by many things: upbringing, genetics, surroundings, choices, and even the books we read. We are both together, and alone. Social creatures that are also distinctly -- sometimes defiantly -- anti-social in our behavior. Yet our lives will never cease to be intertwined. Perhaps more than any other recent movie, The Hours envelopes this reality almost perfectly. 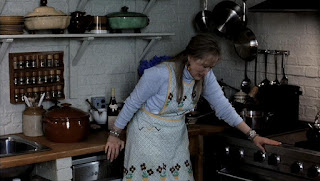 Popular posts from this blog

November 03, 2020
It's Election Day in these great United States of ours. I have today off from work. Our governor declared it a state holiday (though it only seems to apply to certain employers), the idea being that it will be easier for folks to go vote if they don't have to wrangle time-off from work in order to do so. Schools have the day off, as well, so I've heard that's caused issues for some parents. It's never going to be perfect. I applaud the intent.
Post a Comment
Read more

Thoughts on an Election

November 01, 2020
Election Day here in the U.S. is just two days away, so why not have a little fun (your definition of 'fun' may vary), and try to predict the outcome? We'll also touch, tangentially, on the House and Senate outlook, because I believe the Senate and presidential races to be at least somewhat tied together. There's going to be some (minor) bits of history thrown-in, as well, for better or worse. Are you ready? Let's go.
Post a Comment
Read more

April 02, 2021
It's been almost thirteen months since I last saw a movie at a theater. What was once a weekly ritual has, over the course a year, become an almost distant memory. The Covid-19 pandemic has wreaked havoc on everyone's lives, to both a greater and lesser extent. I'm pretty fortunate to be able to wax nostalgic about the lack of movie-going and, to be fair, theaters have been opened for some time now. However, even as theaters re-opened, I didn't feel comfortable going back. I have some underlying health issues that could result in a potentially serious time of it, should I be infected with the coronavirus. But now, Ashley & I are fully-vaccinated. So are several of our friends. We're going to see a movie tonight, at a theater, for the first time in over a year. I'm a little overwhelmed at the thought.
Post a Comment
Read more